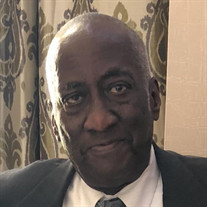 Sunrise: May 30,1946 Sunset: April 30, 2022 Daniel Eugene Taylor affectionately known as “Danny” was born on May 30, 1946, to Dewey and Frances (Craighead) Taylor in Eckman, West Virginia. Where he graduated from Kimball High School. It wasn’t until Daniel’s move to New York he would learn that his quiet personality, integrity, and gift of public speaking would embark him on the road of sales throughout his life’s work. He started his career in pharmaceutical sales in Yonkers, NY, then in Stamford, CT. He continued his love for sales in the realm of car sales for Ford/ Lincoln Mercury until he retired. Daniel had several other jobs he enjoyed doing but one of his most enjoyable ones would be part-time work with his brothers at the Main Taxi stand in Yonkers, NY. It was in Yonkers, NY where Daniel met and married Lucille Ruth in 1967. From their love story, two beautiful children were created Danielle Taylor, and Daniel Taylor (predeceased). He was blessed with three beautiful grandchildren Dejah Taylor, Destini Hornbuckle, and Daniel Taylor (DJ). One great-granddaughter Haiden Booker. When Daniel was not spending time with his family, he enjoyed his quiet time watching his sports! His favorite teams were the New York Knicks and the New York Mets. There wasn’t a season of sports that he did not love watching. He was also known by his nieces and nephews as one of the quiet uncles, who would take you on an adventure from a quick trip to White Castle in the Bronx, a weekend getaway at Lake George, to an adventure to Virginia Beach. When it came to family there was never a task that was impossible. Daniel is predeceased by his parents, twelve siblings, and his son. He leaves behind great memories to be preserved by two siblings Rita Thornton and Cathy Jordan (Greensboro, NC). His daughter Danielle and his granddaughters Dejah and Destini, grandson Daniel (DJ) and great-granddaughter Haiden. Host of nieces and nephews that will miss the quiet presence of their beloved “Uncle Danny” and April Handy (his son’s long-time girlfriend) along with many cousins and friends. There will be a private memorial service and balloon release forthcoming.

The family of Daniel Eugene Taylor created this Life Tributes page to make it easy to share your memories.

A comforting word from you means a lot.

Send flowers to the Taylor family.